skip to main | skip to sidebar

This is a bit off course from my planned post but I would be remiss if I did not address the latest flare-up of an ongoing debate in Network Science. Recently, there has been renewed vigor in an old spat around marketing message impact. More directly, whether a message’s impact is primarily dependent upon virality (thought contagion phenomenon usually associated with a trendsetter as a primary candidate) or that of sociological homophilic associations (think: “birds of a feather, flock together”) or even degrees of variability involving both. For those of you who question the relevance of such a scholastic deliberation, this topic has a direct and profound effect upon the underpinning for a broad and diverse audience – from business strategy and general marketing to political campaigns and even financial market forecasting.

As I’d mentioned in a previous post entitled, “Two Tribes” via the temeticresearch.com weblog called “Mapping the Human Terrain in a Digital World”, the crucial (seemingly ever-lasting) point of contention lies with the focus on “influencers” and their perceived influence-ability – especially poignant when considering how the social web enables unfettered socialization amongst populations. On one side of the debate are the largest, oldest group known for their principles adhering to a common belief that social influencers have… true influence. If this person wears the color purple, soon everyone will be wearing the color purple. Accordingly, influencers are by their very nature the trendsetters. Based on context, they hold the key to a message’s effect on memory and conveyance (impact). This theory was pushed to the masses through Malcolm Gladwell’s book, “The Tipping Point” (ISBN 0-316-34662-4). On the other side of the debate, we have the newest thought tribe. This group believes trendsetters have clout, but the overall impact is usually negligible in the process of whether a trend is adopted or ignored – or, at the very least, there is more to this interaction than simply a social contact involving an influencer and someone to be influenced. They contend that groups involved during a particular message’s transmission hold a more important position than that of a sole trendsetter. To muddy the waters further, recent social experiments have shown validation used by both sides – for example; Watts, 2010 as well as Cohen & Bradford, 2005.

Since 2003 it has remained my steadfast position (involving debate against social scientist and economist alike) that the genesis and/or transmission of a trend involves more than that of a trend-setter introducing said trend to an influence-able non-trend-setter. Additionally, it also takes more than that of homophilic association or that of trusting a friend or group of friends. This multi-variant scenario, buoyed by multiple research efforts undertaken within Digital Sociology a la Temetic Research, identifies an epidemiological model as one that holds value in understanding temetic uptake (successful message impact – in this case via a technology, like the Internet). To serve as an analogy, it is natural for a person to spend the majority of their time around their chosen groups (ref. homophilic-based groupings) and therefore have a greater probability of being exposed to the contagions or illness (assorted colds, etc.) being spread by said group at the time of group interaction. However, it is not an assured position that this person will be susceptible enough to the specific pathogens to which he or she is exposed at a degree necessary to “catch a cold.” Additionally this analogy would hold true when said person encounters a stranger (for the sake of this example, a trendsetter well outside of his or her normal groupings [family, work, church, etc.]). As a result, neither the Influencer model nor the Homophilic Bindings model remains valid in understanding or predicting message impact. No, a more contrarian viewpoint is required to fill this void. It is my belief that the element of Susceptibility (Su) becomes the key principle needing identification, comprehension and tracking of message impact in this world of exploding socialization enabled by technology. The element of susceptibility and numerous, intra-related others are covered by the primary and ancillary algorithms underpinning Digital Sociology.

Josie and the Dolphins 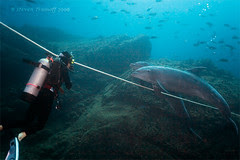 Josie and the Dolphins
Originally uploaded by Steven Trainoff Ph.D..
Posted by rr at 8:38 AM No comments:

Pterodactylus kochi
Originally uploaded by RRNeal.
Posted by rr at 7:24 AM No comments:

, a fancy photo sharing thing.
Posted by rr at 7:13 AM No comments: